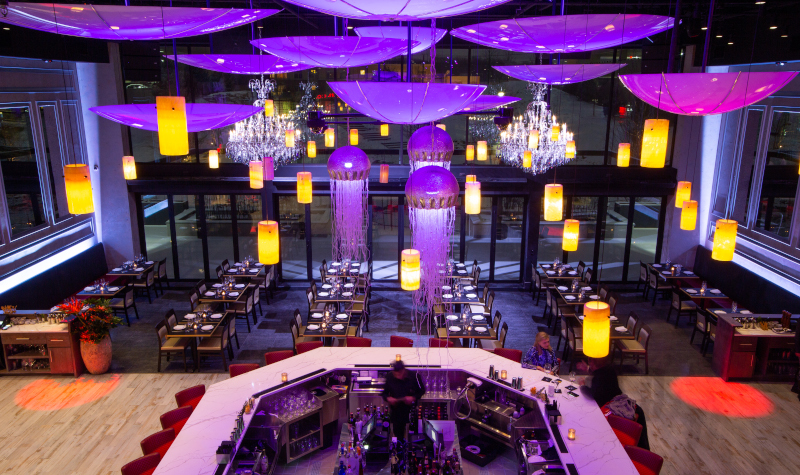 VENTANAS AT THE MODERN

Before or after the show, experience the imaginative cuisine and seductive magnificence of Fort Lee’s new hotspot

With its posh structure, alluring moniker, and tantalizing cuisine, it comes as no surprise that the magnificent and seductive Ventanas at The Modern {200 Park Avenue, Fort Lee; 201.583.4777; ventanasatthemodern.com} has quickly become a nightlife destination and hub for power lunches in Fort Lee’s fast-developing downtown since its grand opening in March.

Helmed by James Beard Award-winning Celebrity Chef David Burke and Restaurateur Alexander Duran, owner of West New York’s Son Cubano, this American-Asian-Cuban fusion concept has become the go-to restaurant and lounge for top-tier hospitality. The new restaurant shares its digs with neighboring eateries in Hudson Lights and the much-anticipated Barrymore Film Center, which is slated to open in February 2020.

Ventanas, weighing in at a whopping 7,000 square feet, sits in between The Modern, a pair of luxury skyscraper apartment buildings just a stone’s throw away from the George Washington Bridge, and the main highways which serve as a convenient connection to Newark’s Prudential Center. (Ideal for a show after dinner, as a slew of world-class entertainment is slated for this fall’s lineup, from Hugh Jackman to Joan Jett and The Black Hearts and The Jonas Brothers.)

But before you head to any one of the Prudential Center’s upcoming shows, fuel up at Ventanas, an experience all its own. The awe-inspiring premises serves as both a sophisticated restaurant for brunch and lunch, and an exuberant venue for dinner and dancing—with DJs and live bands on the weekends if you’d prefer your dinner and a show all under one roof!

Come dressed in your Sunday best and check your coat at the door before strolling into the swanky, neon-lit dining room. Massive jellyfish light fixtures loom over a cosmopolitan bar complete with a chef’s table. In the tapas lounge, chandeliers hang suspended over tables, and floor-to-ceiling windows tout expansive views of a charming outdoor terrace with a large fire pit overlooking a two-acre park. Looking for something quieter? Dine inside The Red Room embellished with decorative lights and coffered ceilings for an intimate dinner.

Inventive dishes impress with diverse brunch, lunch, and dinner menus that are infused with Latin and Asian ingredients. Under the guidance of Chef Burke, the dishes are crafted at the hands of Executive Chef Andrew Riccatelli, who has worked under Bobby Flay, and Chef Sang Choi, who worked previously as a chef with Japan Airlines. Kick-start your lunch experience with Lobster Dumplings, K-Town Wings & Calamari Rings with Gochujang, Tuna Tartar Tacos, Clothesline Bacon with maple and black pepper, and Cocktail Style Shrimp Ceviche served with avocado, mango, citrus, and passion fruit.

Offered on the dinner menu, the Oxtail & Jack Cheese Croquettes are a signature appetizer. But do save some room—as the mains are as hearty as they are crave-worthy. Culling from both the land and sea, fish lovers will delight in the Branzino served with artichoke purée and ratatouille vinaigrette and the Salt and Coffee Crusted Whole Red Snapper. Carnivores will relish every bite of Chef Burke’s patented salt-aged beef. The namesake burger is also a satisfying choice: your burger cooked the way you like it with melted aged-cheddar and malt aïoli, plus tempura onion rings and fries. Other must-tries include the toothsome skirt steak with truffle chimichurri and fries, and the 34-ounce, dry-aged Porterhouse For Two served with sautéed spinach and “Hipster Fries” topped with bacon, chilis, herbs, and peppadew. The Emotional Lobster Tails served with lap cheong fried rice is so good it will have you “crying” tears of joy. Feeling sushi instead? Peruse a separate menu spotlighting all the handmade sushi rolls and sashimi your stomach can handle. (Large sushi boats are perfect for sharing and feed up to four!)

In between ordering your favorite cocktail at the bar and dancing the night away, tempt your palate with a decadent dessert. If you’re one to fend off morsel stealers, try the drool-worthy Desserts For One. The Carmelized Apple Tarte Tatin is served with cinnamon ice cream, and the Coconut Flan, with lemon meringue and rum flambé. Sharing with a loved one? Bridge the distance while sinking your forks into Ventanas’ show-stopping George Washington Chocolate Bridge cake. Talk about love at first bite!