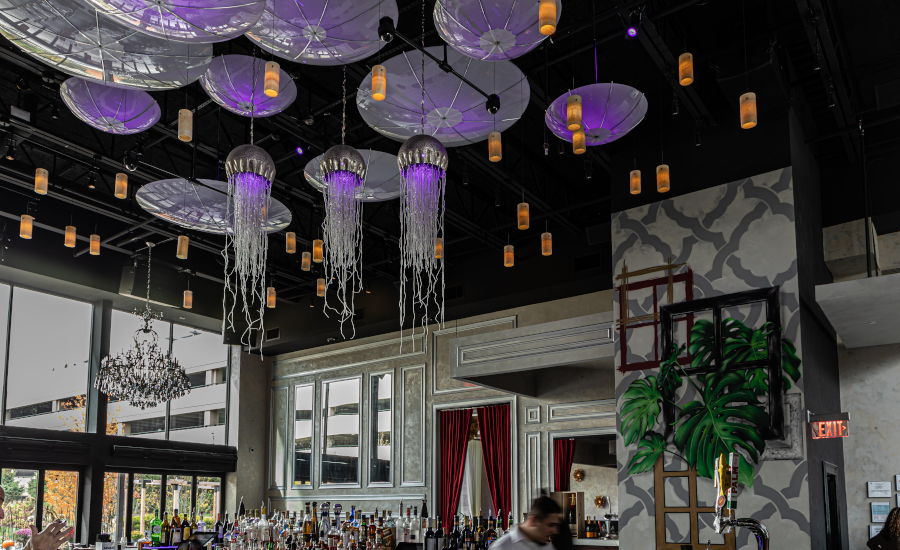 VENTANAS AT THE MODERN // COVER STORY

When two powerful, creative forces come together, there’s bound to be some friction, some fireworks and, when the chemistry is right, some magic.

So it is with Ventanas {200 Park Avenue, Fort Lee; ventanasatthemodern.com; 201-583-4777}. The new, immediately popular $3.2 million, 7,000-square-foot restaurant in Fort Lee where restaurateur Alexander Duran and celebrity chef David Burke – both successful professionals at the top of their game – have joined forces to create one of the most spectacular new dining experiences in the New York metropolitan area.

“We are two strong individuals both successful in our own right,” said Burke about their collaboration where Duran is the owner and Burke, the culinary consultant. “In the beginning, naturally, we had strong opinions about how we want things done,” And as they became more familiar with each other, they realized they both shared a passion for excellence and “now we see eye-to-eye. It’s a good partnership, we are trusted colleagues and fast friends.”

The result is the exquisite Ventanas restaurant tucked between the two dizzyingly high skyscrapers, The Modern at Fort Lee, where Duran’s style and expertise is evident in the luxurious surroundings and attention to detail, and Burke’s world-renowned culinary gifts are reflected in the ambitious menu.

Both men come to this project with truckloads of experience and success. Duran, 56, a resident of Franklin Lakes, is an American success story whose mother and father immigrated from Colombia, South America. Duran grew up in West New York, where he now owns the popular Son Cubano restaurant with his family. The restaurant, originally located in the Meatpacking District area of Manhattan, moved to West New York in 2010 after the arrival in Manhattan of computer giant Apple and the rise in rents that followed.

A graduate of Fairleigh Dickinson University with a double major in hospitality and finance, Duran built a reputation in the import-export business, which he eventually sold to his employees. A deeply religious man, he credits much of his success to his Christian faith and hard work.

At Ventanas, Duran is joined by his son, Travis, 25 – a graduate of the University of Delaware with a major in finance and minor in hospitality – who is one of one of his three managers. And Duran has two other adult children with his wife of 30 years, Marilyn.

Burke, 57, is an internationally respected chef/restaurateur and CIA graduate. He credits his early days at Brooklyn’s The River Café – where many notable chefs got their start – with the enormous success he has enjoyed since.

Burke has since built a reputation as one of the best-known and recognized chefs in the nation, opening several popular restaurants, providing consulting services and appearing on numerous TV shows, including Top Chef Masters, Rachael Ray, NBC’s TODAY Show, Fox and Friends and most recently on ABC’s Strahan, Sara & Keke.

One of his proudest accomplishments is being awarded France’s coveted Meilleurs Ouvriers de France Diplome d’Honneur – he is the only American to ever achieve this honor – and the Nippon Award for Excellence from the government of Japan, for overall skill and technique.

He now owns restaurants across the country, including three others in New Jersey: David Burke Orange Lawn, South Orange; DRIFTHOUSE by David Burke and Nauti Bar by David Burke, both in Sea Bright. His other locations include Manhattan, Long Island, Saratoga, New York; St. Louis, Missouri; and Washington D.C.

The evidence of Duran’s detail-oriented approach to hospitality is apparent even before entering Ventanas: a long, curved driveway at the entrance offers the perfect setting for drivers of exotic luxury sports cars to showcase their expensive toys.

“A gentleman can drive up in his Lamborghini or Maserati and show it off a little,” he said.

And the nod to luxury continues inside, with a dazzling design scheme and dramatic touches, such as the bright blue, full-sized, vintage Bugatti racing car model at the entrance. (The car is among Chef Burke’s private art collection.)

“We are right next to New York City,” Duran said, “and I wanted to give my guests a glamorous restaurant to dress up for.”

Inside, the décor a mixture of contemporary fixtures that are offset by a smattering of carefully chosen antique and vintage pieces and oversized mirrors. Large round purple chandeliers float beside companion chandeliers that mimic jellyfish, complete with long trailing crystal twinkling tentacles.

Above the main dining room with its massive U-shaped bar is a mezzanine where a DJ provides entertainment on weekends. And, occasionally live music is provided. At Ventanas, dancing is always encouraged.

Other pieces from Burke’s eclectic art collection are strategically placed about the voluminous room. Also, on display is a life-sized portrait of Burke awarded to him for winning Robert Mondavi’s “Award of Excellence” in 1996. The portrait painted by Rise Delmar Oschsner, known for her loose, lush brush strokes using bold colors, perfectly captures Burke’s ever-present mischievous half-grin.  Oschsner was commissioned to paint the winners of the Robert Mondavi award, which included 37 other American culinary icons such as Thomas Keller, Rick Bayless, Susanna Foo, Jean Georges Vongerichten, Burke’s mentor Charlie Palmer and numerous other luminaries.

Duran’s penchant for glamour and romance is seen again and again throughout the restaurant including luxurious outdoor seating with bar, gas heaters, TVs and even private lounging beds surrounded by white sheer curtains. While Burke’s intimate knowledge of the kitchen is on display just behind large glass windows to the open kitchen. Again, Burke’s taste in art is seen with a dramatic wood sculpture of a horse’s head placed as if it belongs on atop the shiny steel shelving known in “restaurant speak” as the “pass”, the long, flat surface where dishes are plated and picked up by wait staff. Behind the pass is the line, where Burke masterfully determined where the fire, fryers, sauté station, pizza ovens, prep areas and sushi station would go according to his numerous years as a chef. Thanks to this arrangement, patrons can catch glimpses of the quick, expert dance of six-eight cooks behind the line as they prepare dish after dish. For those who love a front row seat to the kitchen experience there is a chef’s table.

Duran and Burke’s unique blending of talents sounds, feels, tastes, looks and smells come together like a sensory masterpiece.

A huge boon to having Burke as a culinary partner is his access to and knowledge of the world’s best purveyors, who vie to have their products on his menus. It’s the Midas touch because once they have passed Burke’s tough standards, then other restaurants want those vendors’ products on their menu too. This assures that seasonal and/or rare food orders for Ventanas are filled first. Burke says he developed his taste for food quality excellence while he was the executive chef at the River Café, which used the finest seasonal and local ingredients. The beef used in his U.S. patented salt dry aging process is a perfect example.

“The Allen Brothers in Illinois and Pat LaFrieda in Weehawken, New Jersey are the best purveyors of beef the America,” explained Burke. “There are three grades of beef, the best being prime. Only two percent of beef sold in the United States gets this grade and that’s what we serve in my restaurants. We place whole sides of beef in a specially designed refrigerator with walls lined with pink-Himalayan salt bricks. Our 34-ounce Porterhouse steaks are about three-inches thick and serve two guests. And nothing goes to waste in my restaurants. We render the beef fat trimmings and use it to baste the steaks while cooking. This is what we call “Beef Love.” You’ll love it too when you taste the rich, buttery taste.”

Burke, considered by his peers as the most copied chef in the world, loves playful presentations and descriptions that showcase a food’s intrinsic profiles, while simultaneously having a good bit of fun. Some good examples are his famous clothesline bacon – maple-glazed, black peppered bacon hanging from a teeny clothesline with clothespins; or, octopus and chorizo kebabs with cherry tomatoes ride on a duo of standup skewers stuck into a wooden brick; and a chocolate version of the George Washington Bridge. (When he was at River Cafe, it was the Brooklyn Bridge.)

Although Burke is involved in every dish on the menu, the kitchen also features Andrew Riccatelli, former executive chef of New York City’s Bagatelle (and also an accomplished drummer), as executive chef. Chef Sang Choi, who studied and trained in Japan and has been a sushi chef for more than 20 years, is the sushi consulting chef and Son Cubano’s executive chef Julian Medina is the consulting chef of the Latin dishes.

Some Latin dishes include as Guacamole with Plantain Chips; Cocktail-style Shrimp Ceviche; and Sea Scallops and Octopus “Vera Cruz”.

American dishes include Caesar Salad with Baby kale; Herb-roasted Chicken; and Branzino and Rock Shrimp in a Vegetable Vinaigrette.

N.B. Ventanas at the Modern is featured on the cover of the DiningOut NJ Winter 2019/2020 issue.  The cover party is currently scheduled for January 27th.  While this is an invitation only event, many of DiningOut’s email subscribers will receive an invitation.  Join our mailing list at: DiningOut NJ Mailing List

Facebook Event: DiningOut Cover Party at Ventanas at the Modern