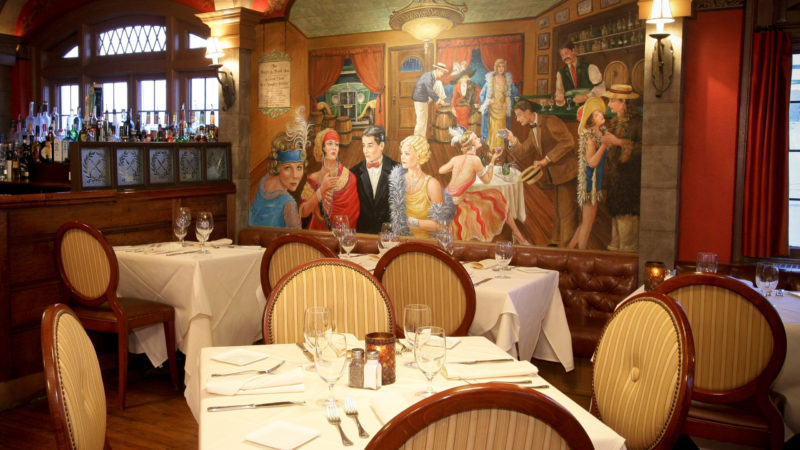 One year after the untimely death of the famed chef and television personality, 10 area restaurants came together to launch the Anthony Bourdain Food Trail—a culinary experience taking diners across Bourdain’s homeland of New Jersey, a place the chef himself called “a cultural petri dish for greatness.”

Anthony Bourdain—esteemed celebrity chef, New York Times best-selling author, and food connoisseur—used his insatiable hunger for authentic cuisine and knowledge to take him around the globe and into the hearts of millions with his Emmy Award-winning namesake television shows, “No Reservations” and “Parts Unknown,” as well as others. Since his tragic passing in June of 2018, Bourdain leaves behind a profound legacy of appreciation for world cultures and the human condition.

His alma mater, The Culinary Institute of America, honored the late, great Bourdain, who grew up in Leonia, with a scholarship in his name. Legions of fans and friends celebrated him on his birthday, June 25, presently dubbed #BourdainDay. Now, thanks to the work of New Jersey Assembly members Paul Moriarty, Carol Murphy, and Angela McKnight, the state Division of Travel and Tourism has cemented a “food trail” honoring Bourdain right here in New Jersey to commemorate his roots and his most cherished places to dine. In an hour-long episode of “Parts Unknown” that aired on CNN in May of 2015, Bourdain takes the viewer on a culinary tour of his hometown, and now that tour has been officially sanctioned as the “Anthony Bourdain Food Trail.”

“Endless clover leaves of turnpikes and expressways twisting in unknowable patterns over the wetlands are to me somehow beautiful,” Bourdain narrates in the episode. “To know Jersey is to love her.”

The trail was launched on June 13 at a small ceremony attended by Bourdain’s brother, Chris, and New Jersey stakeholders inside Hiram’s Roadstand in Fort Lee—the first stop along the 10-restaurant trail. Some are on the “enchanted land” of the Jersey Shore where he vacationed with his family as a child, others are further down the state in Atlantic City and Camden. Cheers to Tony, and to the great restaurants where he would want us to be.

HIRAM’S ROADSTAND {1345 Palisade Avenue, Fort Lee; 201.592.9602; restaurantsnapshot.com/hiramsroadstand}
This Fort Lee fixture, a roadstand that opened 87 years ago, boasts itself as “home to the best hotdog in the state”—and Anthony Bourdain can attest. “I convinced my dad these are the finest hotdogs in the land,” he says in the 2015 “New Jersey” episode on “Parts Unknown.” Decades before the current owners, Jeff Escudero and Pete Demiris, took over in the early 2000s, Hiram’s was a place Bourdain frequented with his father and younger brother Chris throughout the 1960s. “This is my happy place,” says Bourdain in the episode. “Sometimes, I just need that old-time flavor.” Sitting at a bar stool, Bourdain went to town on a cold, frothy birch beer on tap, a juicy cheeseburger, french fries drenched in ketchup, and two deep-fried hotdogs dressed with mustard and relish. “Look at that beauty,” he says before going in for a bite. “I come here to feed my soul the cultural wellspring that is New Jersey. It’s the antidote to every other place.”

FRANK’S DELI & RESTAURANT {1406 Main Street, Asbury Park; 732.775.6682; franksdelinj.com}
The seaside city of Asbury Park is a mecca for musicians from Bruce Springsteen to Bon Jovi and home to legendary venues from the Wonder Bar to The Stone Pony. It’s also the place to get some good Italian subs. During the episode’s visit to Frank’s Deli & Restaurant with musician Johnny Lyon (aka “Southside Johnny”), Bourdain orders one of the restaurant’s signature subs bedecked in “assertive” layers of salami, pepperoni, ham, provolone, tomato, onions, a shred of lettuce, and roasted peppers stacked high on fresh sesame seed Italian bread. Topped with oil and vinegar, the sandwich, Bourdain says, is “married together into a soggy, glorious delivery vehicle for deliciousness.” (Lyon honored tradition by ordering a pastrami sandwich, the selection Bourdain’s father would enjoy when he’d take him there as a kid.)

KUBEL’S {28 West Seventh Street, Barnegat Light; 609.494.8592; kubelsbarnegatlight.com}
During Bourdain’s stop to Kubel’s in the episode, he simply states, “Clams and drawn butter. No matter where I find them now, they always bring me back here.” Bourdain meets with a friend at this quaint, rustic restaurant located in a borough in Long Beach Island within view of the famous Barnegat Lighthouse. They banter and reminisce about Bourdain’s hitchhiking venture to Ship Bottom and setting off firecrackers on the beach as a 12-year-old vacationing with his family here. “I was the bad one,” he recalls to his friend over fried clam strips and cups of New England clam chowder. (Mainstays are also the Angus beef burgers, and signature Jumbo Crab Cakes.)

DOCK’S OYSTER HOUSE {2405 Atlantic Avenue, Atlantic City; 609.345.0092; docksoysterhouse.com}
Atlantic City is “America’s first dream vacation,” Bourdain says in the episode, going on to dub the area “paradise.” While inside Dock’s Oyster House, an upscale seafood restaurant established in the late 1800s, he says there is no better place to go in Atlantic City for a “big freaking lobster” with crab imperial than Dock’s. The menu also includes an endless selection of oysters and an exquisite raw bar with plates ranging from Snapper Crudo to Tuna Tartare. “This is what it’s going to take for Atlantic City to come back,” Bourdain says. This particular visit landed a year after Hurricane Sandy ravaged the area. Bourdain continues on to say, “Places like this survived the Great Depression, two World Wars, numerous declines and rebirths—a symbol of what Atlantic City was and should be again.”

KNIFE AND FORK INN {3600 Atlantic Avenue, Atlantic City; 609.344.1133; knifeandforkinn.com}
Bourdain continues along his favorite stops in Atlantic City. Inside the Knife and Fork Inn, a castle-like 1912 landmark steakhouse with a theatrical interior, Bourdain meets with Vicki Gold Levi, the daughter of a prominent Atlantic City photographer in the 1930-1960s (who photographed Marilyn Monroe). Here, the two discuss the sensibility of the six-mile-long boardwalk, which Levi remarks as having a “weird, stuck-in-time feel with dozens of mom-and-pop stores, arcades, and a never-ending carnival” among its many amenities; Bourdain calls it “a wonderland of juvenile delinquency.” At a table in the dining room with a view of the open kitchen, Bourdain orders the Pretzel Crusted Swordfish over lump crab meat while Levi orders the Pan-Seared Scallops to enjoy over glasses of wine from the restaurant’s award-winning wine roster. “A beautiful old restaurant with really good food is much more interesting than a glass box with good food,” Bourdain says.

TONY’S BALTIMORE GRILL {2800 Atlantic Avenue, Atlantic City; 609.345.5766; tonysbaltimoregrill.com}
Situated on the busy Atlantic Avenue, lit in the evening with old-style neon pizzeria lights, is what Bourdain, during the episode, calls “a taste of his youth”: Tony’s Baltimore Grill. “I’m very sentimental about Jersey Italian, particularly spaghetti and meatballs,” he says to his dining companions, comedians Bonnie McFarlane and Rich Vos, before serving himself a slice of sausage pizza. Specialty pizzas at Tony’s range from Clams Casino made with clam sauce, bacon, onion, green pepper, and garlic to Nino’s Favorite made with sausage and cherry pepper pieces. Spaghetti dishes are also abundant, which patrons can order with their pick of traditional tomato sauce, meat sauce, mushrooms, anchovies, clams, or sausage.

JAMES’ ORIGINAL SALT WATER TAFFY {2821 Boardwalk, Atlantic City; 609.344.2408; jamescandy.com}
No trip to a New Jersey beach is ever complete without untwisting the wax paper tails off a thick, chewy piece of salt water taffy. “I’m a sucker for nostalgia,” says Bourdain in the episode. “James’ salt water taffy candies had a mystical hold on me.” The candy store has a hodgepodge of fudge, macaroons, and taffy flavors ranging from banana to peppermint, strawberry, and vanilla, which are also available sugar-free.

LUCILLE’S COUNTRY COOKING {1496 Route 539, Warren Grove; 609.698.4474; facebook.com/lucillescountrycooking}
Within a landscape of “endless swampland and forest” in Warren Grove is Lucille’s Country Cooking. Inside this conspicuous quaint eatery, (you can’t miss it with its red paneling and white-washed window panes) the episode shows Bourdain listening to local jeweler and musician Paul Evans Peterson tell him the tale of the New Jersey Devil over a plate of steak and eggs. Other comfort food must-tries include the French Toast, Pancakes, and Pork Rolls. Lucille’s is also famous for its delicious, freshly-made pies, flavors of which include apple, pumpkin, pecan, and raspberry apple.

DONKEY’S PLACE {1223 Haddon Avenue, Camden; 856.966.2616; donkeysplace.com}
History says, this restaurant’s original owner, boxing heavyweight contender Leon Lucas, packed the punch and kick of a mule, so goes the name. Donkey’s Place, a counter and bar joint that was managed by Lucas’ son Robert at the time of Bourdain’s visit in this episode, boasts the “best cheesesteak in New Jersey,” he says. To Bourdain, who orders his sandwich on a poppyseed kaiser roll with American cheese, browned onions, relish, and hot pepper, the cheesesteak was “better than Philadelphia.” Bourdain adds, “It is sublime; worth driving across the state in a blizzard for.”

TONY & RUTH’S STEAKS {837 North Eighth Street, Camden; 856.964.8193}
Bourdain completes his journey, meeting with community leader Tawanda Jones at this unassuming restaurant, which serves comfort foods that span the gamut from cheesesteaks to hearty dishes of beans, eggs, and brown rice. The restaurant is situated in the heart of what Bourdain dubs as a city that was “once a manufacturing powerhouse,” and home to the New York Ship Corporation, Campbell’s Soup Company, and record label RCA. Jones chats with Bourdain about how she carries the torch of her humanitarian grandfather, Walter Green Jr., a former military man, RCA employee, and bodyguard for boxer “Jersey Joe Walcott,” by continuing her support of a local drill team. She tells Bourdain, when she was 15, she was asked to lead the team that her grandfather helped revive, and purchased 80 uniforms and three drums when the funding was lost. She goes on to explain that she went on to head the Camden Sophisticated Sisters Drill Team that works to “motivate, educate, and empower the youth.”