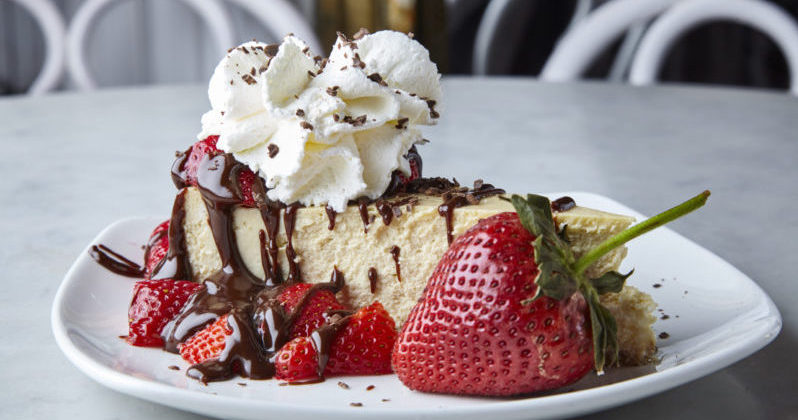 SERENDIPITY 3 // ACROSS THE RIVER

On a quiet street tucked between Second and Third Avenues – not far from the joyous tranquility of Central Park – stands Serendipity 3 {225 E 60th Street, New York, N.Y.; 212.838.3531; serendipity3.com}. The legendary New York City staple is recognizable to New Yorkers and tourists alike by its signature black-and-white façade. It’s a cherished spot where Andy Warhol noshed on lemon icebox pie and indulged a goblet of their now-famous Frrrozen Hot Chocolate and where Marilyn Monroe would stop with her pal Paula Strasberg (a copy of Warhol’s iconic pop art painting of the late sex symbol hangs on the café’s whitewashed walls).

Founded 65 years ago by Calvin Holt, Stephen Bruce and Patch Caradine – a dancer, design maven, and bookkeeper, respectively – the dining establishment was christened after the Persian tale of the three legendary princes of the island of Serendip (now Sri Lanka). The buzzword serendipity, coined by 18th Century writer Sir Horace Walpole, is a term Caradine uncrossed while deciphering a crossword puzzle in the London Times and an apropos name for their destined undertaking. The cozy café, which presently serves a bevy of exquisitely prepared breakfast, lunch and dinner options on a charming menu that reads like a storybook, remains a special hideaway where celebrities like John Travolta, Leonardo DiCaprio, Kim Kardashian, Cher and Madonna delight in the mouth watering fare and bask in the feel-good vibes that exude from this quaint and home-like haunt.

Having served as the backdrop for a string of romantic comedies including “One Fine Day,” “Trust the Man” and “Serendipity,” (named for the restaurant), you might even fall in love dining here. “That was the first movie to premiere after 9/11, and it was really kind of a love story to New York as well,” said Manager Joseph Calderone on a November afternoon inside the dual restaurant and boutique. “John [Cusack] and Kate [Beckinsale] fell in love over a frozen hot chocolate and they parted and wanted to reunite by chance. They left it to destiny to see if they would ever find each other and they did.”

A premier dessert destination and boutique, Serendipity 3 could not have been situated in a more fitting locale than on the Upper East Side. Nestled in the midst of a quiet stretch of East 60th Street blocks from Central Park, the restaurant is surrounded by other similarly-themed neighboring businesses valuing tasteful design from Venfield, which houses antiques dating back to the 1700s and custom home furnishings, John Salibello, a premier source for original modern lighting, furniture, art and antiques and the now shuttered Alt Box Espresso.

Stepping inside the snug, two-floor café, a boutique is stocked with a rainbow array of sequined miniature stuffed animals, namesake coffee mugs, packets and candy bars of their Frrrozen Hot Chocolate mix, and copies of a 65th Anniversary Sapphire Edition of “Sweet Serendipity,” a cookbook penned by Bruce and written with a foreword by Cher, among a mixed bag of other trinkets. Further inside the restaurant, wrought with whimsy, decorative wreaths with holiday balls and colorful lights hang from the art nouveau walls while the dining room – from which light disco music wafts – is fashioned with a white, mini-tiled floor, matching white chairs and wooden and marble tables that make guests feel like they’re sitting at your kitchen table. In the main dining room, the centerpiece of which is a hot pink wall with circular reflective décor, tiffany lamps and mosaic butterfly fixtures dispense over the tables with a puppet of Andy Warhol hanging high above the table he used to sit at. “When the owners started Serendipity 3 in 1954 they didn’t have much money so they went to antique shops and garage sales and estate sales,” explained Calderone. “Tiffany lamps were not in fashion at the time, so they bought off all these tiffany lamps, whitewashed the walls and had all the pops of color through the restaurant.” The décor carries to the two-roomed second floor with white tables and chairs, mirrored butterfly fixtures and colorful chandeliers. Inside the room to the left of the winding staircase holds the “movie table” which is situated near a fireplace where Kate Beckinsale and John Cusack shared a Frrrozen Hot Chocolate in “Serendipity.” To this day, couples have gotten engaged at that very table. The wall across from the table is papered in a print of white, pink and blue butterflies painted by Andy Warhol. “He came here before he was famous,” said Calderone. “He would come in with theses drawings people didn’t want that day and he would sell them to the owner for a low price. The owner would frame them and sell them in the front of the shop. We were selling Andy Warhol originals way back and that’s how Andy paid for his checks, with drawings. And then when he was famous, he continued to come here. He would bring his friends and he would give everybody things to color and they would have coloring parties. So it was really fun.”

Whether you’re coming in for tea and cookies with the ladies, a tasty lunch or dinner, or a round of desserts with friends and family, there are dishes fit for every mood and occasion. Opening Serendipity 3’s storybook-like menu, guests will be tickled by all sorts of comfort foods: footlong hot dogs, a Bi-Sensual Burger made with cheddar, bacon, chili and raw onion, Serendipity Mac N Cheese made with creamy fusilli pasta drenched in multiple cheeses and served with potato chips, chicken pot pie, country meatloaf served with mashed potatoes and gravy and a slate of the freshest sandwiches. No need to fly to California to experience Haight-Ashbury… Serendipity 3’s got it in sandwich form! This sandwich is as organic as they come: roasted turkey, with melted muenster, a large, thick slice of tomato, topped with alfalfa sprouts on pumpernickel bread and a cup of Russian dressing. (Good luck attempting to wrap your mouth around this mountain… if it even fits into your mouth!) The All-American Buttermilk Chicken Sandwich is also sure to satisfy: crispy chicken breast on a toasted brioche roll dressed in lettuce, tomato and mayo. If you’re feeling like breakfast either at breakfast or any other hour of the day, the Eastside Western will have you rising and shining: five eggs made with tomatoes, cheese, onions, peppers and ham. If you’ve come for the dessert, you’re in for a real treat: Drug Store Sundaes abound from their Forbidden Broadway Sundae made with chocolate blackout cake, ice cream, hot fudge and whipped cream, to their classic Banana Split (served in a full size goblet or a coward’s portion if you can’t handle all the goodness!) These sundae flavors, in addition to their best-selling frozen hot chocolate, are also sold in pints in supermarkets near you. Aunt Buba’s Sand Tarts, pecan butter cookies that are sprinkled with powdered sugar and crumble in your mouth with every bite are made with the original recipe from Holt’s southern roots, and pair perfectly with a cup of coffee or tea. For those with pricey palates, splurge and pre-order the $1,000 Golden Opulence Sundae. This Guinness Book of World Records winner as the most expensive dessert is made with three scoops of Tahitian vanilla bean ice cream, infused with Madagascar vanilla covered in 23-karat edible gold leaf and topped with the world’s most expensive chocolate, Amedei Porcelana. Suffused are chunks of Chuao chocolate – derived from cocoa beans harvested by the Caribbean Sea – exotic candied fruits from Paris, truffles from Switzerland, gold dragées, a confectionary garnish, and Marzipan Cherries. A small glass bowl of Grand Passion Caviar completes the sumptuous dish served in a Baccarat Harcourt crystal goblet (a take-home gift to the indulger), an 18-karat gold mother of pearl spoon and a gilded sugar flower.

Any first-time guest at Serendipity 3 must start their dining experience off right: with a goblet of their iconic Frrrozen Hot Chocolate, or any one of its variants (peanut butter, macchiato, and s’mores, the marshmallows for which are torched at the table!) “A year after the beginning of Serendipity, the owners were looking for a different kind of dessert and they came up with this which was sheer genius, and it’s become the icon of serendipity since then,” says Calderone. The chocolate-y delight, served in a glass goblet with a mountain of homemade whipped cream and chocolate shavings will crack a smile with the first slip. We can’t divulge what’s in this frozen drink though; its contents are top-secret – a recipe even Jackie Onassis was denied! The only thing known about this decadent concoction – 25 million of which have come flying out of the kitchen in the last six decades – is that it’s blended with milk, ice and 14 mystery cocoas. Eat your heart out, Santa.