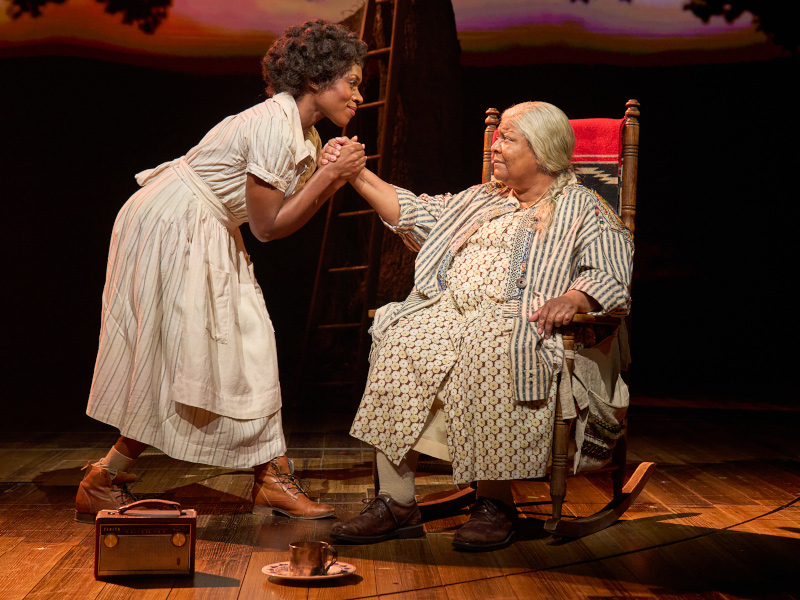 We recently sat to talk with Myra Lucretia Taylor, the talented actress who plays Gran Georgeanna in TINA – The Tina Turner Musical on Broadway. Not only has Myra been recognized in the industry with awards such as the Lucille Lortel Award for Outstanding Lead Actress in a Play in 2016 and 2018; she has recently been nominated for a Tony Award for Best Performance by a Featured Actress in a Musical for the production of TINA – The Tina Turner Musical. “TINA” has been playing to sold-out audiences since opening.

Tara Jean: Myra, it is such a pleasure to meet you.  It must be amazing to be part of TINA the musical on Broadway in New York City!

Myra:  It is very exciting. The best part is the audience’s reaction. At the end of the evening. It’s like a tidal wave of good coming at you. You know people are on their feet. They are dancing and singing along with us.

Tara Jean:  You play the character of Tina Turner’s grandmother. Her name is Gran Georgeanna. Tell us a little bit about the Gran and do you relate to her?

Myra:  Gran is the grandmother of Tina. Young TIna is with me when she is 16 years old. I am the one who says she has a gift and a talent and needs to make her own way. Sure, everyone can relate to the character. When the audience meets at the stage door after the performance, they would say you remind me of my grandmother. Grandmothers just love you and take care of you and then they can send you on your way. So, I think everyone can relate to that and want to be someone in a child’s life that can give them that good beginning. And to push them out of the nest to fly, right? Everyone has to be pushed out of the nest and hopefully the person who does that does it with love.

Tara Jean:  How did you prepare for the role? The musical is based on Tina Turner’s life and her journey to becoming one of the greatest female artists of all time. Did you need to do any research or preparation?

Myra:  My research is the script and the music. Right, that’s what I am doing, so I put on the wig. It’s a lovely gray wig that is the most expensive wig in the show! It’s long gray natural hair that is not dyed. And it’s great because they are saying that the grandmother is part indigenous.

Tara Jean:  Tina Turner is a musical icon. I grew up loving her music. Her energy on stage is phenomenal, I always think of her as this beautiful tall woman, larger than life, with long legs and an amazing voice!

Myra:  Oh! She is not tall!!  When I met her, we were the same height and she had on heels! She is so lovely. She gave me the loveliest hug and her husband kissed my hand. I was so happy that she appreciated what we were trying to do; She came to our opening night in 2019. Everybody loves Tina because she is so gutsy and so beautiful. And the music is so strong and she is so beautiful. So, it’s like the best of both genders. If you take the kind of traditional assignments of the genders. She is strong and she makes her own way in the world and she is just someone you want to be, someone you want to look like. Everyone wants to be able to dance like that and have that kind of freedom. And mostly, I guess, it’s to have that kind of effect on people; because Tina Turner makes you feel better about yourself and better about the world.

Tara Jean:  What is your favorite song and favorite number in the musical?

Myra:  My favorite song is I Don’t Want to Fight. I love that song. My favorite number and routine in the musical? Haha! It’s got to be Rolling on the River. First of all, that’s just famous. As soon as people hear the guitar strings, ‘cdinga batta binga’, they hear that and people are like “Oh Yeah!!”  Come on, how lucky are we to be able to produce that kind of response from somebody? There is a lot of crazy stuff going on in the world. If we can kind of relieve people for a minute and they can feel a little bit better about themselves. And you can see it. People just lay their burdens down! They walk out of the theater lighter. I am really proud to be a part of that.

Tara Jean:  What’s it like working with your cast in the TINA musical?

Myra:  It’s a wonderful group of people. It’s a great company. We really like each other. When it’s down time backstage we are always just talking and having fun with each other. I think we all realize how fortunate we are.

Tara Jean: I would love to hear about the audition process for Gran Georgeanna? I was an actress in New York City years ago and it’s so exciting to hear how an actor is cast in a show in New York City. Do you have a memorable experience from the audition?

Myra:  I was doing another show in New York, School Girls; or the African Mean Girls Play Off Broadway and the casting director was Bernie Telsey. He was visiting with us one day, and he said, “Myra there is a show coming over and I think there is a part in it for you.”  And I said, “OK.”  So, I auditioned and something happened that I don’t think has ever happened to me in an audition. I kind of got lost in the character a little bit and I started speaking my subtext in addition to what was printed. Then I got a call back. They had to change that date and time, and my agent said, “You got it? They changed the date so don’t get confused.”  I said, “Yeah, yeah! I got that.”  Well, long story I didn’t have it. I was sitting home and my agent called and said, “Where are you? They are looking for you!”  I said, “What?!” I managed to get downtown in 20 minutes. I don’t know how I did it. Walked in. Did the callback and was fortunate enough to get cast. God bless Bernie, he is a good casting director. Very good.