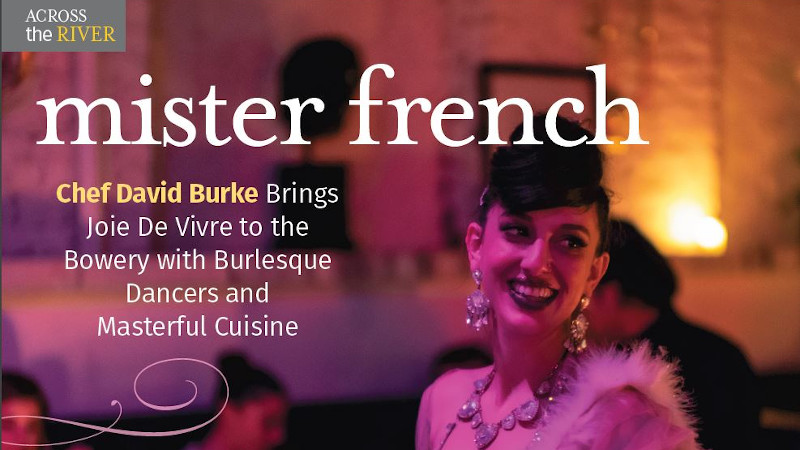 The Bowery has been evolving since the Dutch first landed. The Bowery, the old Dutch word for farm, was the longest road and considered the upper reaches of Manhattan in the 1800s. Since then, the Bowery has evolved from elegance and home to mansions of New York’s most prosperous residents; to a haven for prostitutes, drug dens and gambling after WWII; and then to one of the city’s most trendy thoroughfares with fashion-forward boutiques and chic restaurants. These days, the Bowery is also home to one of New York’s most architecturally diverse and historical streetscapes, a place where many immigrant groups have contributed their own bit of character and can consider their own bit of home.

Mister French encompasses roughly 4,600 square feet and is divided into three separate sections: bar, main dining room and a skylit atrium for dining and private events that also showcases an open kitchen. “The bar area is conducive for socializing,” said Burke. Influenced by majestic chateaus and French vintage glam, the bar area has high top tables and space to mingle. Perfect for loungers who want to take in the venue with a few drinks and noshes instead of a sit-down meal. The bar area and main dining room are embraced in white brick and romantically illuminated by crystal chandeliers. A main table for communal dining and cozy black booths fill the space. Black and white iconic fashion photography punctuate the walls. The draw becomes more than the delectable French cuisine. On Tuesday and Friday nights, a 30-minute burlesque show is staged complete with dancers and magicians. “The performers are top quality,” Burke said. “The entertainment portion has been very well-received. People are looking for it.” Burke emphasized that while the entertainment has grabbed many headlines, it’s the French kitchen that’s the main event. “I moved into a French kitchen. The burlesque aspect is a small percentage of what we’re doing,” said Burke. “My focus is designing the menu and delivering the best food.” The final piece of the layout is an impressive open kitchen housed in a back atrium with a skylight. The space functions as an area for private events, or serves as a space to host guest chefs and tastings that should be welcoming to all guests. Burke says he’s a fan of the open kitchen where “there has to be some choreography and a space where people can have a seat.” From flavorful dishes, punchy cocktails to burlesque dancing, Mister French offers an inexhaustible joie de vivre that many of us seek at times. “I’m happy to be part of it, and we’re off to a very good start,” Burke said. “I hope this can be a place where we can help brighten up your day, as we need more of that right now.”

The soiree begins at the bar and this is not the time to skimp on the drinking. Since it opened earlier this year, Mister French has evolved into a cocktail destination thanks to industry veterans from Las’ Lap and Bathtub Gin who lead its cocktail program. Along with the standard top-shelf labels are unmarked bottles of alcoholic surprises, syrups, liquors that line up along the white marble bar. They await the skillset of the bartenders ready to serve over 30 original drinks from their menu. Highlights include The Charbon Rouge, served up with Hendricks gin, fresh lime juice, organic horseradish with a kick red habanero and black coffee hot sauce. There is the Fille de Lavande, served with Mister French’s house made ‘champagne’ tonic showcasing lavender essence, vanilla and lemongrass – paired with icy gin, served over rocks in a Bordeaux glass garnished with a char-grilled ruby red grapefruit and cracked peppercorn. The menu also plays with Sazerac and whiskey concoctions, as well as tableside service for those who want to high roll with the Sidecar Majesté also addressed for those “destined for royalty.” This $295 specialty includes a legendary cognac from rémy martin, containing grande champagne eaux-de-vie aged between 40-100 years, Louis XIII cognac, Cointreau liqueur, fresh pressed lemon juice organic cane reduction, half rim organic demerara brown sugar expressed orange oil and gold leaf.

The food menu, designed by Burke and executive chef Guillaume Thivet, elevates familiar French dishes. There is an emphasis on group dining and “connecting the dots between France’s innate style and Ole World culinary confidence.” “We don’t have just one signature dish,” Burke noted. Diners won’t see familiar signature Burke items like clothesline bacon, but guests will be dazzled with rich French fare including dry-aged cote de boeuf, halibut dressed up with lobster and caviar garnish, lamb chop with cippolini onions, black garlic paste petits legumes and beetroot puree and a duck breast with figs, farroto, braised endive and vanilla-orange jus. There is also an emphasis on shared dishes like bacon au poivre with uni, jalapeno, and sticky rice; French dip crisps; duck and waffles; wagyu tongue with truffle celery and smoked mayo, alongside standards like frog legs and escargots. Entrees can be paired with frites towers in three flavor varieties. Desserts feature omelette a la Norvegienne (the French version of baked Alaska), creme brulee and a chocolate hazelnut cake.