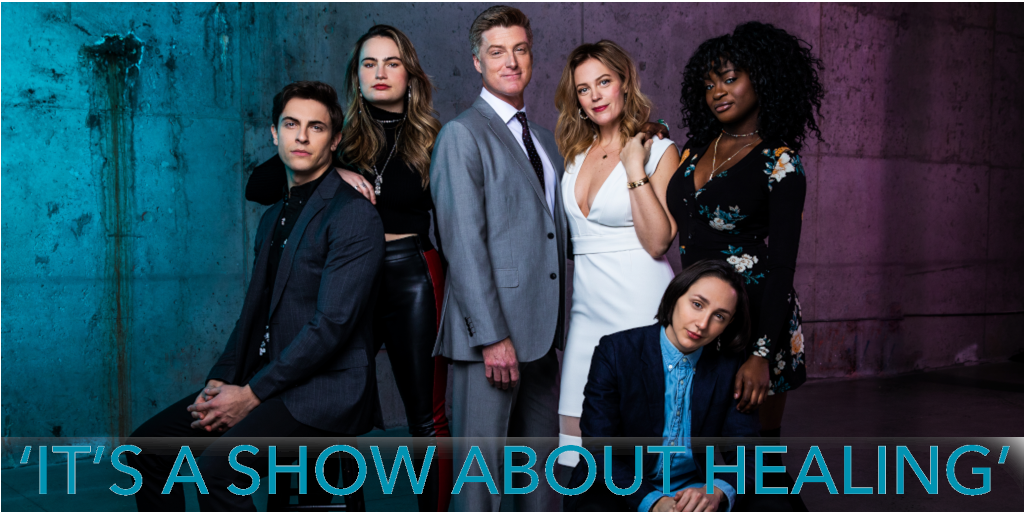 JAGGED LITTLE PILL // ACROSS THE RIVER

In 1995, the tender, introspective jams that comprise Alanis Morissette’s iconic album Jagged Little Pill had Elizabeth Stanley belting them out in her car as any angsty adolescent. Twenty-four years later, she is the lead actress of the poignant, incendiary new Broadway musical bearing the name of the Grammy winning album. Onstage, she finds herself channeling the woes of adulthood into her role as Mary Jane Healy, the matriarch of a seemingly perfect family who also happens to be in the throes of opioid addiction. Other members of her clan, however, aren’t as angelic as they come across either – a dynamic that couldn’t be more ironic. Here, Stanley gets candid with DiningOut about how the problems of the world today manifest in this must-see musical based off Diablo Cody’s namesake Pulitzer Prize winning novel directed by Diane Paulus, coming of age in the CD era, and working with Alanis Morissette.

DiningOut: Tell me about your role and the family dynamic of the Healy Family.

Elizabeth Stanley: I play Mary Jane Healy who is the matriarch of the Healy family and, in many ways, the family that we can relate to and that we’re all trying to be. They’re an upper middle class Connecticut family. Sean Healy [Sean Allan Krill] works in the city, she [Mary Jane] stays home with teenage kids, and they’re son is a superstar swimmer and going to Harvard and their adopted daughter is blazing her own trails, but on the inside, there’s a lot of stuff they’re not dealing with. Life is too intense, but it comes to a point where they have to address it.

What kinds of issues does the Healy family endure?

They’re dealing with the type of things we open up to in our news browser. A black man was shot; another died of an opioid crisis; a scandal in the political realm. Life is really intense for all of us. My character especially is an addict coping in unhealthy ways…. And then a lot of events unfold within the context of the story that trigger and ignite things. I think the story lives up to the album. I think Diablo Cody’s book [Jagged Little Pill] is extraordinary. The album is filled with emotion – rageful, unabashedly angry, but there are also love songs on there like “Head Over Feet.” “One Hand in My Pocket” is a great anthem in its own way. All of these different colors are things we all experience on any given day… overwhelmed, but antagonizing over painful moments of your life. If you listen to the lyrics within the song: swallow it down/it’s a jagged little pill. Alanis is not saying, “take drugs it makes you feel better.” She’s saying life is a tough pill to swallow. There are so many things that are hard to take in and process. She is saying, “It’s better if you do it. You have to walk through the fire and be a living person… I think that’s what the show is saying.”

What was it like meeting Alanis and working with her?

Alanis is so deep, that she made clear working on this. Being around her… any time she speaks she’s really eloquent and a very wise and I think her songwriting is the same way. She is really, really generous of heart and spirit and really puts everyone at ease around her. She never ever made it feel like ‘I’m here to judge and tell you what you’re doing wrong with my music.’ It was always ‘I’m so grateful that all of these new artists are breathing life in this music. We’re giving her this gift of hearing her music being played back to her, which allows her to experience her songs in a new way.

What do you like best about playing the role of Mary Jane?

That I can bring my full self to it. She’s just as complex as any adult woman as I know. She’s funny, but she’s also in a lot of pain. She’s a wife and a mother. She’s dealing with some of her demons, but she’s still walking through life and encountering people doing stuff at her kids’ school. She is living an existence similar to what a lot of people live in daily life. It’s a show about healing… and how do we heal in this world that we’re living in.

How do you feel you relate to playing the lead role?

I think the parts of her I relate to are feeling the pressures of trying to be perfect, which you know, is an endless cycle for any of us. I definitely deal with that at points of my life: this isn’t going to end well. You have to accept something else and find a different way. She’s very committed to her marriage and to her children. I think those relationships mean everything to her, and I feel that the relationships in my life mean a lot.

Tell me about the storyline and the themes the musical explores?

There’s a huge teenage plotline. High school students, falling in love, having sex, experimenting, figuring out their sexuality. Our daughter is an African-American woman, so there are issues of race, what that’s like, adoption, what’s it like to grow up with parents who don’t look like you and what is culture for you. Sexual assault. I think it’s on our radar. So many have lived with in silence for a long, long time. What kinds of trauma does that create and how we deal with that. Addiction. How do you cope with things… and what does that do to our relationships in today’s world.

Let’s go back to 1995 when Jagged Little Pill was out. What were you doing at the time? Do you remember picking up the album in the CD store or watching her music videos on MTV?

I was in high school. I was learning to drive. That’s what this album reminds me of: being in the car for the first time without parents with my friends. I never owned the album… I didn’t have a lot of spare cash. I didn’t have a big CD collection, but I loved it. And I had so many moments of just feeling like screaming at the top of my lungs in the car to the songs.

What does that album mean to your personally?

I think it’s one of the first albums that I was aware of where it was a woman really saying what she felt and in a powerful way. Music has always been a great way for people to express themselves and there have been rock ‘n’ roll women who made different kinds of sounds preceding Alanis. For me, she was iconic in that way and everything about her presence: the way she performs, her long hair, the bluntness about ‘This is where I’m at. This is how I’m feeling.’ This is something that set the album apart.

What did you love most about working with this particular company and being a part of this musical spreading the legacy of this iconic album?

This cast is extraordinarily talented. This particular show is asking us as the cast to do the work that the story is about which is taking care of each other, listening to each other, really trying to understand what someone else is going through, allowing space for each other to make mistakes and learn and not take things personally if you say something personally accidently that is hurtful to someone else and that type of awareness and patience and presence is a challenge for any of us. And I think we have to be doing that. I think it’s the only way to really truthfully create this story, but if definitely makes me admire the people in the room that much more.

To experience Jagged Little Pill on Broadway, get tickets at jaggedlittlepill.com.