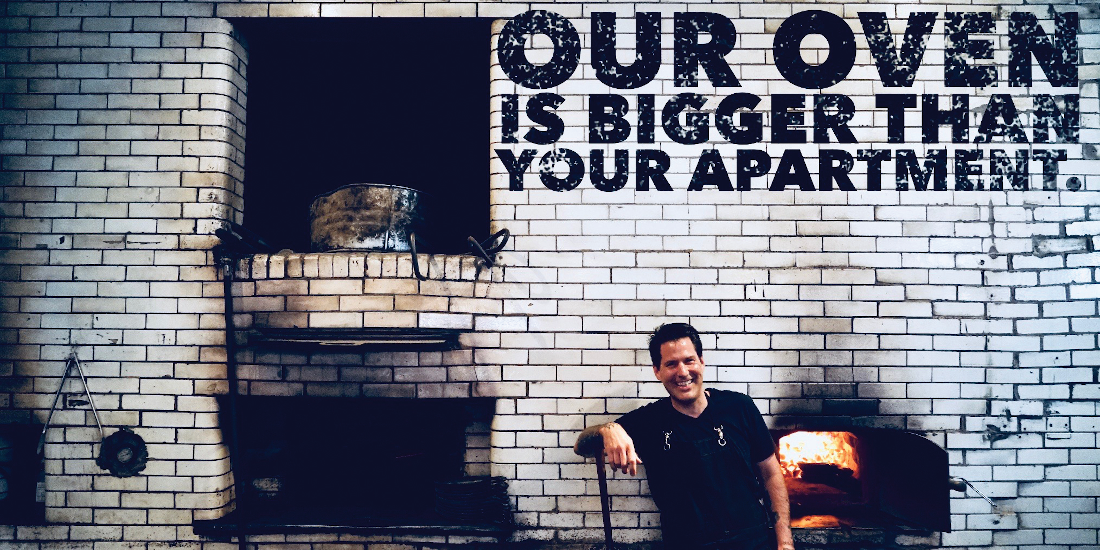 “This was Sinatra’s favorite place to get bread,” said Owner Paul Gerard at a table outside the restaurant one late afternoon in October. “He used to send guys here to fill up suitcases with the bread and they’d fly out to Palm Springs with him. So we figured he’d be very happy if we had some booze with the bread.”

Framed photos of classic actors and musicians from the silver screen grace the exposed-brick and wood-paneled walls of Antique Bar & Bakery from Old Blue Eyes to John Cazale, Sophia Loren, and civil rights activists. Their pictures adorn the restaurant and hang over comfy booths with black-top tables and candles—a cozy ambience that is accentuated by its famed 30-ton oven situated at the rear, which Gerard likens to a “house of fire.” It’s at this happening eatery on a quiet Hoboken street where zesty spins on your favorite classic dishes—steak, fish, and chicken (as boldly stated on its awning)—are served up and waft through the air with all your favorite classic rock.

“I relate everything to music,” says a gentle-voiced Gerard, a former vocalist of a rock ‘n’ roll band called “Baby Strange,” an ode to T-Rex. The Brooklyn native grew up living next door to C.C. DeVille of Poison. “There’s only 12 notes, and if you look at food, it’s three-chord cooking. It’s simple and frank like a Ramones song, and that’s how I look at it…it’s soulful. It comes from all the roots and tradition and it’s memorable to people and they know it. If you hear the opening riff of ‘Satisfaction,’ you know it. If you taste a piece of chicken that’s been cooked on an open fire, you know it. And I think that’s a good place to start.”

It was inside the establishment’s whopping, 400-square-foot porcelain brick oven, built from the ballast of a Dutch ship, in which 5,000 loaves of the famous Hoboken sticks were baked daily, serving both Hoboken and a myriad of restaurants in Little Italy since the 1920s. Gerard describes the dense, thick sticks as a “very good sauce bread.”

“The original baker was from Italy, but he was a huge fan of French bread, so he took Italian bread and shaped it like a French baguette. It’s a hybrid of the two,” says Gerard.

Gerard and his partner, Joe Castelo, added the word “Bar” to the restaurant’s name after they took over the fixture a few years ago.

“Within thirty seconds of my partner and I meeting, and when he took me in for the first time and I looked at the oven—I was so amazed,” recalls Gerard. “I had never seen anything like it. And he’s a filmmaker and a director, and he looked at me and said, ‘What would you do here?’ And I said, ‘chicken, fish, and steak. That’s what everybody eats.’ That became the basis for what we do. It’s kind of like a mix of French and Italian technique, grandma-style. I grew up seven generations in Brooklyn. We turn the volume up. We’re not reinventing the wheel, we’re just setting it on fire.”

And rightfully so. Gerard was once the star of a pilot for a cooking show called “Work the Line” with fellow culinarian, the late, great Anthony Bourdain, and Tom Colicchio, centering on the sweat-inducing, high-stress job of the accomplished chef. Like Bourdain, Gerard infuses the diverse flavors and cooking styles of his world travels into his menu. Having lived and worked in kitchens like the Greenhouse Tavern in Brooklyn, and the restaurants Bayona and August in New Orleans, in addition to successful restaurants in London, and Panama, Gerard’s dishes are a melting pot of all these different flavors that have taken on a life of their own, in what his manager calls, “American neighborhood cuisine.”

“I like to add a lot of spice, herbs, and flavors that are much bigger than you would normally get at a regular restaurant,” he notes.

In true American fashion, portions at Antique Bar & Bakery are just as plentiful as they are flavorful, and of the highest tier in terms of quality. The half (or whole) Organic Chicken dish is prepared with meat that the restaurant receives from Lima Family Farms—a family-owned farm in Central New Jersey where grass-fed beef, vegetables, and pastured pork and poultry are sustainably cared for. Those with insatiable appetites should try the Dirty Rib-Eye, a two-pound bone-to-bone cut. But don’t go hungry while waiting the 30 minutes that sizzling slab needs to cook. Whet your appetite with nutritious and delicious appetizers from the Sweet Potato Hummus made with chile oil and Tahini or a plate of Mussels with Green Garlic Butter and Bread.

The Spaghetti Squash Carbonara made with pancetta and served with a poached egg is also a must-try. Seafood-lovers can take a deep dive into the Whole Local Fish served with a bulb of garlic and cooked lemons. Carnivores will devour the Dry Aged Rib-Eye Burger with cheese sauce. Connoisseurs of fine Italian cuisine will be tickled when sinking forks and knives into the moist and tender Osso Buco, braised in a white wine sauce, served with brown butter gnocchi, and garnished with celery leaf.

Relishing the food, however, is only a small portion of the enjoyment of making it. “It’s very simple, and it’s done in such a way that it really evokes memories,” explains Gerard, of the method and magic to his cooking. “When you char something with coal and fire, it triggers something in your DNA about a memory of ‘this is what food is supposed to taste like’ … I love how our ability to cook with fire is what created civilization; it’s what allowed us to digest easy, to start talking and start telling stories, to start making tools to start doing art … and that’s one of the things that I always want to convey in a restaurant. Put your phone away, no TVs, dig the music, dig your friends. I want to make really good food for you so that you can have a wonderful night and enjoy yourself.”